A Coding Academy in Johannesburg

South Africa is facing a severe shortage of developers leaving significant sectors such as financial institutions struggling to recruit employees with critical computer skills.  Now, a small, alternative academy in Johannesburg is working to change that deficit. 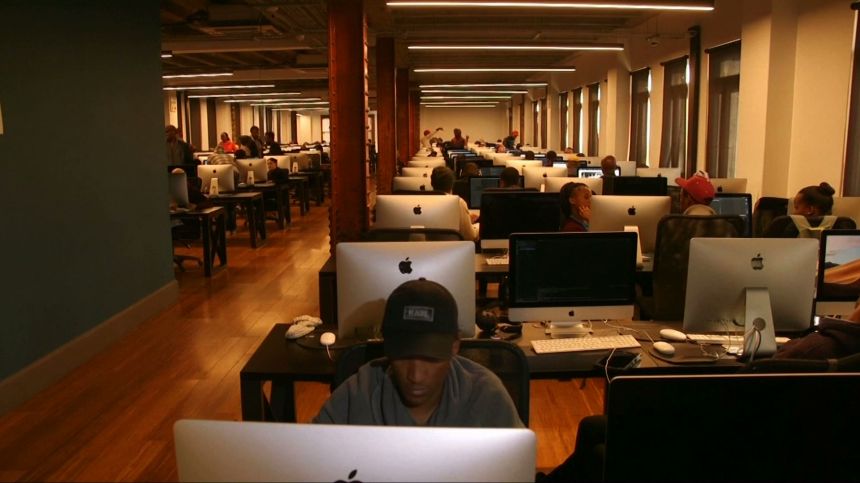 There are no teachers or classes, and students don’t need to have any prior experience or qualifications to enroll at the “We Think Code” academy in South Africa.  Instead, the program focuses on peer-to-peer training for students to learn how to develop websites and apps. Students are selected through an intensive boot camp that sees only the top one percent with quantitative skills admitted to the school.  Nyaradzai Samushonga is the chief executive at We-Think-Code.

“Our universities are doing a great job, of delivering technical skills that are desperately needed within the business space. The reality is that they can’t keep up with the demand. And the university channel focuses on a particular type of high school education, which then feeds into what they do. A program like WeThinkCode_ democratizes the opportunity by saying ‘it doesn’t matter what your prior educational background is, it doesn’t matter what your prior social background is, you could be born to code and here’s an opportunity to include you in the economics of technology.”


Unemployment in Africa’s most advanced economy has remained high since the end of the apartheid era 25 years ago.  South Africa’s government says youth unemployment is a “national crisis.”  The 15 to 34 age group accounts for almost two-thirds of the country’s jobless.  But We Think Code says it wants to help improve things and be part of a solution.  About 98 percent of the students who’ve graduated from the program are now employed.

“Well we’ve seen that if you’re able to train one skilled developer successfully, that impact that individual has is on 10 to 15 other individuals in that person’s environment because they’re creating employment, they’re bringing more efficiency into the workplace, they’re creating more profitable businesses enabling companies to employ even more people. So the impact that one skilled developer has is on 15 other individuals. If we’re able to produce an extra 100,000 skilled developers across the country, we have 1.5 million people that can be employed in the country.”

The program, however, is struggling to recruit girls. Only 17 percent of the We Think Code students are female.  One of the aims of the program is to dedicate more resources to challenge perceptions that coding is only for males.
Software programmer and Geekulcha community manager, Skinny Shugo Kgwedi says there is a growing need for South African youth to have coding skills so they can have leverage when looking for jobs.

“I’d say coding is important because we are evolving in a technological world whereby, you get to build anything. So if you are starting a business and you need a website, you might pay a lot of money for a website. So if you know how to code, you can build your website which will be less. It gives you a chance whereby you get jobs easier; you get hired easier because a lot of companies now are involving in technology because of the 4IR (Fourth Industrial Revolution).”

Convincing young South Africans to learn how to code remains an uphill battle. Only four-of-ten public schools have a computer lab, according to the South African Institute of Race Relations.  Expensive data prices and a lack of internet infrastructure outside of Gauteng and Cape Town means that millions of students eager to learn coding are left without access to the internet.