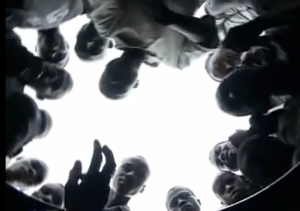 In Burundi, Hundreds of children leave their rural homes to the capital Bujumbura in search of a better life.  But end up living in Squalor on the streets. Now human rights groups are urging authorities to find new solutions to the growing problem.
On any given day, the streets of Bujumbura are teeming with thousands of children and adults who try to squeeze out a living begging from strangers. As nightfall’s, homeless children seek refuge in the city’s sewage tunnels, one of the only places kids feel safe to fall asleep.

At 14, Felix Ndayengurukiye is already a veteran of the streets of Bujumbura. He left his village in Ngozi, in north-central of Burundi several years ago, fleeing an abusive family and poverty in search of a better life. But disappointment swiftly followed, as Ndayengurukiye ended up living on the streets and sleeping in sewage tunnels.

“What led me to sleep in this tunnel is because when you sleep on other people’s verandas, you are often caught by police, who then take you to jail because they accuse us of stealing from people, even when we are innocent. That’s why I prefer sleeping here in the tunnel,” he said as he struggled to settle into position to sleep in the cramped tunnel.
Thousands of street children in Burundi’s urban centers are compelled to fend for themselves and struggling to survive. Some lack proper shelter and often face abuse from adults and police alike, who routinely round them up and put them in prison without any charges.
Humanitarian agencies say poverty is one of the key factors leading children into the streets. And that Rural to urban migration is another major cause of children ending up homeless.
Deo Ndikumana, member of the national commission of human rights in Burundi, says the attitude is symptomatic of a wider lack of political will to tackle the street children issue.
“There may have been overlaps and a lack of clear politics, but otherwise, I know that we have the capabilities to reintegrate these children into society. Foreign donors as well as local authorities should organize themselves in order to include it in the national budget. This situation is unacceptable and inhumane,” Ndikumana said.
Former Street child Jerome Irankunda counts himself among the lucky few who have been given a second chance. Irankunda grew up on the streets but a local organization that helps street children took him and provided him with vocational training. Irankunda now makes small wooden toys that he sells to expatriates. He says he dreams of having a normal life and a family of his own.
“I want to have a wife who can help me with paying the bills, so that in ca se I am not around, the family can survive. As for children, I don’t want to have too many children that I cannot take care of. I want to have few children, who can also say our father tries his best to look after his family.”
For years, several organizations have been working to reduce the number of children living on the streets, with little success.  Local children activists many organizations are struggling to make significant changes because of a lack legal knowledge or jurisdiction to force the authorities to act.