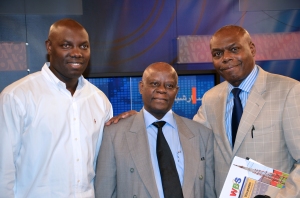 Sir Gordon Wavamunno is one of Uganda’s most prominent entrepreneurs. Born in Rugaaga, a rural village in South Western Uganda, he now has a personal fortune estimated at over fifty million dollars with companies in a wide variety of pursuits, including media, transportation, tourism, farming, trade; manufacturing, real estate – property development, and motor vehicle distribution.  His ability to succeed, despite repeated hardships is remarkable.

Gordon Wavamunno is probably one of Uganda’s best-known and most successful businessman, – and a key player in the country’s economy.

This year, Queen Elizabeth II bestowed a knighthood, the United Kingdom’s highest honor on Sir Gordon, recognizing him for his contributions to society and international relations.

From an early age, Wavamunno knew he wanted to be a businessman. After joining his father’s trade business, he worked as a cashier and traded agricultural produce.

He quickly saved enough money from that enterprise to establish a dry cleaning business, bought a car and started a car rental and driving school business in Mbarara, Western Uganda.

A couple years later, he expanded the business to Kampala. From there, with two partners he opened Uganda Peoples Transport and Taxi Service Limited, and eventually left it to form his own company “Spear Group” and obtained a Daimler Mercedes dealership to sell its products.

Gordon Wavamunno’s story closely mirrors the fortunes of post-independence Uganda – During the turbulent years of General Idi Amin’s regime, and the early 1980s under President Milton Obote, his efforts were almost completely destroyed. He was thrown in jail twice; his business was vandalized and looted beyond repair.  He survived, started over and reclaimed his fortunes.

He persuaded Daimler Mercedes to retain him as Uganda’s sole dealer. And founded and built the now multi-million dollar, Spear Group of enterprises; consisting of Spear Motors Limited, which sells Mercedes Benz, and other brands.

Over the years, he has moved into other businesses including, WAVA textiles and clothing, state of the art WAVA Fancy furniture, WAVA Ostrich and Horse farming, WAVA bottled water, and more.

Wavamunno continues building his rapidly expanding portfolio, Wavamunno Broadcasting services or WBS Television is an affiliate of Voice of America’s to TV- Africa. The station is one of the leading privately owned media operations in the Country.

The self-made businessman has won the Ugandan Businessman of the Year award seven times. And despite leaving school at a young age, he has honorary degrees from Makerere University, the nation’s oldest premier institute of higher learning and Nkumba University, where he serves as the chancellor.

Beside his business skills, Wavamunno has never turned his back on the less fortunate. His company Spear Motors Limited has donated beds to Katalemwa, a home for the disabled children. He has also donated other materials to schools. And worked with St. John’s Ambulance in Uganda and regularly contributes to the building of schools, hospitals and places of worship in Uganda.

As if this were enough, He is also a diplomat in his own right. For example, he represents the interests of the republic of Hungary in Uganda.

As the saying goes, behind every great man is an even greater woman. Wavamunno married Morine in 1974.  The Wavamunno’ s live comfortably in the Munyooyo suburbs of Kampala; in the multi-million dollar home they call Cape Villa, on the shores of Lake Victoria.  They are often photographed attending public outings. Wavamunno attributes his business success largely to his wife.  He says, “Morine is not just my wife, the mother of my children but someone who has become my chief business advisor and confidante. He credits her with challenging him to venture into many now successful businesses including textiles.

Mr.  Wavamunno does have his critics in Uganda; some say that he has attained his success at the expenses of the smaller businesses that have no access to his kind of capital or political connections.