Nigerian Billionaire is one of Africa’s Richest People

Posted on September 17, 2012 by Paul Ndiho Leave a comment

Aliko Dangote is one of Nigeria’s most prominent entrepreneurs says his life’s ambition is to build the biggest company in Africa– and the biggest cement company in the world. His cement factories already span the continent. 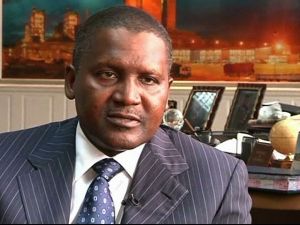 Born in April 1957 in the Northern Nigerian city of Kano, his drive, determination and entrepreneurial skills have helped make him Africa’s richest person, with a personal fortune estimated at over 11 billion dollars according to Forbes magazine.  The industrial giant’s portfolio encompasses wide range of investments. Dangote currently has cement plants-or facilities under construction across the continent from Senegal — to Ethiopia– to South Africa.

In 2010, Dangote list his conglomerate bearing the same name on the Nigerian stock exchange– and it boosted his estimated personal wealth five-fold at over 11 billion dollars making him the fastest riser on the Forbes worldwide wealth list.

“Things are changing, if you look at other areas, before, normally, you know especially in Nigeria, Nigerians look more or less into oil and gas you know because oil and gas really messed us up big time, in the sense that people have actually dropped agriculture, they’ve dropped almost everything.”

Dangote now wants to list 20 percent of the cement company on the London stock exchange next year, at a price that would place its value at 35– to 40 billion us dollars.

“The real target is for us to see what value can we add and pay back to this country of ours that we call Nigeria and also the continent of ours that we call Africa and the only way to do this is by trying to make sure that you stay where you believe you can add a lot of value in business; at least so far we’ve been taking the flag on Nigeria and the flag of Africa to put in places that they were never ever expected to be seen.”

Despite his success, the 55-year-old Dangote has detractors. His critics in Nigeria say that he has attained his success at the expenses of the smaller businesses that have no access to his kind of capital or political connections. Dangote admits he has been friends with several recent presidents of Nigeria and has enjoyed lucrative tax breaks. But, he denies receiving any special favors.

“well you see, if condition even becomes tight, the biggest difference that we have is actually we are not highly leverage, as a matter of fact, we try as much as possible to use our own money to do most of these projects even if we borrow money, today, we’ll only borrow money temporarily before we replace that money with our own cash-flow,”

However, Bismarck Rewane, chief executive officer of the Lagos based consultancy firm, financial derivatives; who has known the tycoon for more than 20 years and he says Dangote plays to win.

“As an employer, he works like he does, the man is a workaholic, and he works basically 24 hours a day. When i used to work with him, it was the same thing, you travel, you come back same day, you go to London, you leave London that same day, finish your meeting and you’re back; he hates to travel during the day because he thinks it’s a waste of your time so he likes to travel at night, get there in the morning, do your business and basically come back so he’s on his toes and he doesn’t demand from you what he doesn’t do.”

Analysts say the speediness at which Dangote is building his pan-African empire is risky, citing project delays and management issues as their greatest concerns.  But, his supporters say Dangote demonstrates that African entrepreneurs can succeed in industry without having to rely on foreign investment from the west or china.

With annual revenue of 2.5 billion dollars, the Dangote group contributes nearly one percent of Nigeria’s G-D-P Africa’s second biggest economy. The firm also employs more than 23,000 people in a country with massive unemployment.