Posted on November 21, 2012 by Paul Ndiho Leave a comment

Mogadishu international seaport is bustling with activity as Somalia begins to see a semblance of peace and security from decades of civil war that brought this once booming port to its knees.  Today, business has picked up with trucks arriving to offload tons of cargo from ships that are lining its harbor. 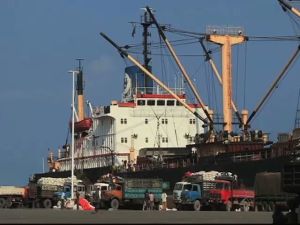 Ships from Dubai and Pakistan are arriving with merchandise to be sold in Somalia.  As peace grows and normalcy returns following the expulsion of the Islamic militant group Al Shabaab, shipping traffic on the sea has increased– and employment opportunities are on the rise for Somalis who work the port as casual laborers.

“There is a big difference between this year and last year, all our trucks were in the garages and there were hardly any ships at sea. We used to come to the port to look for work but there was nothing. Now there are many ships here, the port is full and others having been waiting for days at sea waiting to dock.”

Years of war have taken its toll on the port, facilities are inadequate and ships have to spend days offloading their cargo, while others wait at sea for their turn.  The port has seen an increase in the number of cargo ships it handles– up to 35 vessels per month now dock at the facility, providing the government with much needed revenue, that it can use to rebuild the nation’s basic infrastructure.

“We are continuous run on this ship, first from Dubai to Mogadishu and this time I am coming from Pakistan bringing sugar to Mogadishu. Before this ship was doing about… in the last 14-16 months continues regular run bring different cargo here, general cargo, vehicles, everything to this port.”

Hope is rising in Somalia, after African union peacekeepers, with support from the united nations, seized control of Mogadishu and other parts of the country that were formerly Al Shabaab strongholds.  Now, thousands of Somali’s are returning home and business in the capital is on the rise.

Earlier this month, the United Nations Security Council unanimously extended the mandate of the African union mission in Somalia (Amisom) for a limited period of four months.

“The Security Council has just adopted the resolution 2073 on Somalia, but unfortunately what has happened is just a four month extension. We would have expected that it would have been a full year resolution, but because of disagreements on a number of key issues, I’ll explain to you two or three of these issues. One of the issues in particular relates to the maritime component. The African union had made the specific request that the AU and special support package be extended to cover the maritime component.”

The four-month extension fell short of the expectations of Somali ambassador Elmi Ahmed Duale, who told the Security Council that his government had hoped the extension, would be for much longer.

“I hope the security council will not limit itself to the three months approval of the extension, but we were hoping that it would be for one year minimum with all the support required for Amisom and also the Somali national security forces so that they can, in due course, take over the responsibilities of security stabilization and stability within the country.”

Until last year, most of Mogadishu, was, for several years, driven by a fluid frontline dividing the two sides– Al Shabaab fighters– and Somali government troops, with the latter supported by Amisom.

Since Al-Shabaab’s withdrawal from the capital in august 2011, the frontlines have been pushed back to neighboring areas.  In late September, Al-Shabaab insurgents withdrew from the port city of kismayo– their last remaining stronghold, but the militant group still controls parts of the country’s south-central areas.