Posted on September 17, 2013 by Paul Ndiho Leave a comment

In the eastern democratic republic of Congo, M23 rebels fighting United Nations and Congolese military forces say they are ready to disarm and return to peace talks.  But there are major hurdles to clear before any peace deal can be agreed upon. 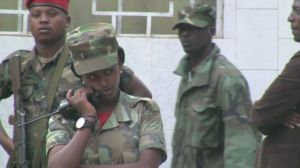 African leaders trying to end an 18-month-old uprising in eastern Congo are calling on Kinshasa and the M23 rebels to restart negotiations after the army, backed by U.N. Troops, bolstered the government’s position with rare military successes in recent fighting.

Armed with a tough mandate to crush armed groups, the Congolese army and the U.N. Intervention brigade, have forced the rebels to retreat from positions in the hills overlooking Goma– but it has not extended its gains deep into m23 territory.

Reacting to the DRC summit held in Kampala last week, m23 president Bertran Bisimwa, told reporters over the weekend in Bunagana near the eastern city of Goma, that his troops are ready to lay down their arms, provided the government meets certain conditions.  Bisimwa also reiterated a long-standing demand that the government eradicate the Rwandan Hutu FDLR rebels.

“Yes we’ll disarm; yes we want to disarm because when we’re fighting it is our soldiers who die on the frontlines. Yes we want to disarm if the disbarment can resolve the problem of war then we have to disarm. But we’ll disarm on two conditions, first to resolve the problem of FDLR who are in our country for twenty years now. Secondary, we’ll disarm after refuges coming into our side that are in Uganda, who are in Rwanda and if they can bring them back to their country and their homes then we are ready to disarm.”

The m23 insurgency is the latest incarnation of a Tutsi-dominated rebellion that has repeatedly tried to integrate into the Congolese army– only to withdraw.  M23 took up arms last year accusing Kinshasa of reneging on the terms of a 2009 deal to end a previous uprising.  Tensions have been fueled by accusations from U.N. Experts who say that Rwanda is backing the rebels. But the administration of Rwandan president Paul kagame denies those allegations.

Sultani Makenga, the leader of the m23 rebels, says that his group would send a delegation to the peace talks which reopened earlier this month in Kampala.  But he said the rebels were not interested in pursuing a new reintegration deal.

Millions of people have died from violence, disease and hunger since the 1990’s, as foreign-backed ethnic rebel groups have battled for control of eastern Congo’s rich deposits of gold, diamonds and tin. The fighting has destabilized the great lakes region.

On a recent trip to Goma, the U.S. Government’s newly appointed special envoy to region, former senator, Russ Feingold said that the Africa Union and the international community are working together to resolve one of the world’s worst situations of violence and humanitarian needs.  Feingold says President Barack Obama has made the Congo conflict a top priority.

“The united states believes that is one of the most serious situations in the world. I think president Obama know that we haven’t put enough emphasis on it in the past and although there’re many other crisis , things like Syria, things like Egypt and issues all around the world. This president, this secretary of state has made this a top priority.””

The former U.S senator also noted that the people of eastern Congo have endured violence, including sexual violence for the last twenty years.  He said now is the time for everyone to pull together and try to do something about it.

“This should be a sign to all the people in the United States and all over the world that this a high priority for this administration and of the American people to try to do the right thing here for everybody in the world particularly the people that continue to suffer in the eastern Congo.”

However, with the help of a new U.N. Intervention brigade, the army has pushed m23 fighters away from the city of one million people.