Students at Maryhill Girls High School’s – Science club in Mbarara, Uganda have designed a self-monitored car and plan to use the prototype to entice potential investors for funding. The robotic car is generating a buzz in Uganda. 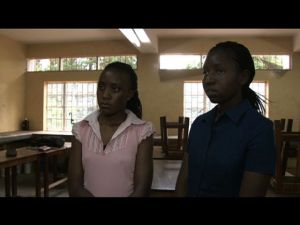 Like countries in sub-Saharan Africa, Uganda has its share of road accidents. A fast growing population and rapid urban development means t more cars on the road and more road mishaps. Unpredictable traffic is the way of life here.  But all that could change if a group of young students from Maryhill High School in Western Uganda have their way. These girls have come up with innovative ways to save lives by designing a robotic car. The vehicle has sensors that automatically stop you from speeding, force you to wear a seat belt the moment you turn on the engine of the car, and can even alert the owner of the car.

They’ve designed their very own version of the electric car.

“We programed the robot to do many different functions. So we came up with an automatic seatbelt and it works in this way. The seatbelt will come down automatically after 5 seconds because we have a sensor here and this sensor is pressed, a message is sent to the motor, which makes the seatbelt come down and the passenger is prompted to wear his or her seatbelt. When the passenger is leaving the seat and tries to un-lean from the back of the seat the seatbelt will automatically come up, so that is the way we programmed it, it’s an automatic seatbelt.

The students have now set their eyes on increasing the number of safety features to include an automatic driving light control system.

“You see a lot of people from our country are being affected by the heavy light, full light and sometimes even the sun, so we came up with this.  When the light intensity increases beyond what the driver can contain, this driving light controller comes down automatically because of the light sensor… If the light intensity now reduces to what the driver can contain, it will come back up automatically.”

The self-monitored car was assembled by a team of students, supervised by one of Uganda’s leading innovation and technology teachers, Nickolas Kajoba. He says the robotic car is connected to devices that sense abnormal speed. At first, the sensor will send a warning, and if the driver ignores that warning, the car will automatically call or send a text message to alert the owner.

“Originally the idea was to make a call but we decided to add a text message feature on the phone. And if you fail to respond, then you can divert the call to somebody else. The person you want or you can even divert it to police no problem.”

The project is funded mostly by the school to encourage students in the science department to dream big.  Againe Sandra, is one of those students..

This is the touch sensor, the main brain of our car and it’s the annexed back … We have different motors. And these are the motors that we’re using and control the movements of the car. We also have the auto sonic sensor and these data cables.

Nickolas Kajoba, the teacher behind the self -monitored car says this car represents an important milestone for students in Uganda, showing commitment to top level teaching, and that investing in science and technology.

The self – monitored car is still under construction because the students want to make major improvements on the prototype before they take it for a serious road test. But in the meantime, these young girls already have their sights set on expanding the brand.