The Ugandan capital – Kampala has one of the worst traffic problems in the region. People often say they plan their lives around the traffic jams, which often continue throughout the day.  Even driving short distances can take hours. 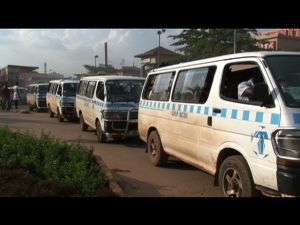 Unpredictable traffic is a way of life here. Even if a place is only a kilometer away, you might need to leave your house an hour early or jump on a Boda boda. Sometimes it’s even faster to walk.

The worst places are roundabouts and T – Junctions where traffic police officers stop one side of traffic for a very long time, and Boda boda cyclists cut in front of moving cars. This arguably is the main cause of traffic jams in Kampala — the cars already in the roundabout have the right of way, and you are forced to wait. Kiiza Joseph Ndiho is a self-made entrepreneur; he says for the business community, time spent in traffic jams means money lost.

“It’s Crazy it depends on which route you take, if you take for example Entebbe road, where so many people using one road, it’s going to take you an hour or two so if you do that every day, you lose 21 days in a year to traffic, that’s a huge cost in terms of time, in terms of resources, you are burning fuel, you’ve lost out on time, you should have been at work earlier. So what people do is that they tend to get up earlier than usual – 4 o’clock you can imagine you are required to get to the office at 8:00 o’clock but you are up 4:00am when you are only going to travel a distance of 15 kilometers – That can be nasty”

The other factors that contribute to congestion, he says, include the general condition of the roads, most of which are potholed, absent of properly signaled intersections, and poor connections and interchanges.

“You also have to take into consideration the fact that the city is growing, there are more people coming in and more people buying cars for the same size of roads. So it’s got to be something that will totally revolutionary it. We could have underground roads or the roads that could go above the normal roads for us to manage this jam.”

Kampala City Council Authority or KCCA plans to unveil a master plan aimed at solving the traffic problem will also address issues of accessibility and connectivity in the metropolitan area.

, With an annual population growth rate of four per cent, Kampala is the fourth fastest growing city in Africa, according to the Ugandan Bureau of Statistics, but there have only been a handful of new roads constructed in the past decade.

But for now, traffic is worse than ever and residents are increasingly taking Boda’s to beat the jam

“If you are trying to get around in Kampala, this is probably the easiest way of getting around. Boda boda are taken by everybody here especially during traffic jam hours. Just jump on a Boda boda and it will take you where you want to go.”

Boda boda ridership has skyrocketed in recent years, making it one of the fastest growing businesses in Uganda. They’re visible on nearly every street corner of the city.   And you won’t be in Kampala long before a Boda driver asked for your business

If you’re not interested, a simple ‘no’ will get drivers to leave you alone. You can travel most anywhere for 1,000 and 2,000 Ugandan shillings, but make sure to agree on the fare before the ride begins.

But Boda Bodas are extremely dangerous, because drivers seem will do whatever it takes to get you to your destination quickly. Expect to dart in front of and against traffic and even through crowds of pedestrians when necessary. Boda boda accidents account for most of the hospital visits and traffic fatalities in Kampala;

Wages in the Boda boda business greatly exceed those for other low-skilled jobs so many young men flock to the   business from other professions.

Around half of the drivers in Kampala rent their motorcycles at a rate of Shillings 60, 000 per week, but even at those prices, renters are able to tuned big profits and some see it as a ticket to achieving their dreams.