Posted on November 3, 2014 by Paul Ndiho Leave a comment

By Paul Ndiho
Homosexuality is illegal in Zambia; it’s a situation that has drawn increasing criticism from many western nations. Local activists say that the rights of homosexuals and other marginalized groups should be protected and are calling on the government to be tolerant towards people with different sexual orientation. 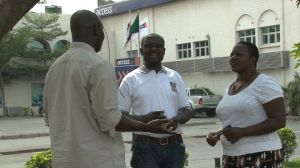 Homosexuality is taboo in many African countries. It is illegal in 37 nations on the continent and activists say few Africans are openly gay, fearing imprisonment, violence and to some extent losing their jobs. However, gay rights activists are beginning to speak out about the treatment of homosexuals, and other marginalized groups.
Zambia’s tough anti-homosexuality laws date back to the British colonial era and public opinion remains strongly against gays and lesbians. Jane Kulaba, is a renowned human rights activist and runs the Dette Resources Foundation, a Christian nongovernmental organization. She says that the government says that any discussion concerning gays or homosexuals is considered promoting immorality in the nation.


“Since we’re Christians, let’s us tolerate one another. It’s my appeal that we should me
At certain point, and let us allow for dialogue and call for dialogue certain dialogue to discuss these things and just create that relationship with the public.”
Ms. Kulaba’s organization is trying to engage the government, churches and other
Human rights organizations in shaping the paradigm shift on how society views the lesbian, gay, bi-sexual and transgender community. Some churches are beginning to open up and to speak publicly about the rights of gays.
Reverend Patson Kabala of Presbyterian Church of South Africa says that people who feel oriented towards people of the same sex should be embraced.
“My question is, do they use their humanity? The answer is no. They are human beings and they also need to be protected. In my view, they need to be embraced. They need to be given space in society”
Reverend Tellas Shumba, reformed church of Zambia shares the same sentiment. He says discrimination against the LGBTI community is widespread and remains rampant across much of the continent.
“People have been closed up because we have been too judgmental. As Christians, our mandate is to preach and to share the word of god to people regardless of what status they fall in.”
Zambian gay rights activist, David Musonda, says the government needs to create an atmosphere where the LGBT community, government, church leaders and civil society can meet and have a dialogue to forge a way forward.
“So to all the people out there, when you see a person who is gay, or who is a lesbian, who is intersex, let us not rush to killing them. They are a child to somebody; they are a father to somebody. Let us just look for remedies. What is the best remedy? If we have an understanding with them, let us strike that balance because then we will have actually gone and bow our head. The world is after all one world that all of us have to live in.”
In 2013, a Zambian gay couple, Philip Mubiana and James Mwape, were living together in Kapiri Mposhi, before they were arrested, after the authorities were tipped-off by the relatives of one of the men. They were later detained, tried and acquitted on charges of having consensual gay sex after magistrates said the state failed to provide sufficient evidence of the crime.
The subject of gay rights is almost always greeted with disapproval and many believe homosexuality goes against the religious values of the country – at this workshop organized by Panos Institute, an organization that empowers communities to shape their own agendas has brought together community leaders, civil society groups and gay rights activists to debate the issue.
“So we know that we are treading on a sensitive ground, but we also acknowledge that
Homosexuality exists in Zambia and the fact that it is underground and hidden, it creates other complications in other aspects of life.”
In Zambia a conviction for sodomy carries a 14-year prison sentence. Other African countries are struggling with anti-homosexuality laws that date back to the British colonial era. A Ugandan constitutional court recently annulled tough anti-gay legislation signed into law by President Yoweri Museveni.
Voice of America reached out to Zambian government officials for comment on their anti-gay laws but they declined.