A Malawian Student Makes His Own TV Station

By Paul Ndiho
Innovation is happening across Africa, in all different sectors, from education to energy, banking to agriculture and in television broadcasting. In Malawi, a university student has created a community TV station called “analog TV project” one that he hopes will transmit all social events taking place on campus. 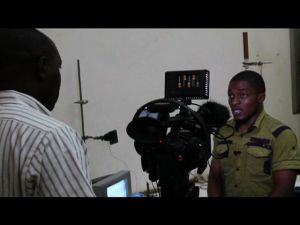 Chisomo Daka is a student at the University of Malawi’s chancellor college. He is pursuing a degree in education science and he is trying to make his mark in the television broadcasting industry. By his own admission, he says that he is not an engineer by training, nor does he claim to know much about engineering. But his love and passion for tale-communications has inspired him to build from scratch a community television station. Daka says he hopes to use this TV station to broadcast social events and student projects throughout the entire campus.
“We have been able to transmit a video signal and we have been able to capture that. But by the end of the day, we would want to finalize it and make it a full working television station for the campus.”
Before his first broadcasting test signal, he was just a normal student, and few students knew about his innovation. Today, Chisomo Daka has created a name for himself as the new kid on the block. His community TV station is a hit on campus and everybody is talking about him. He says operating out of the norm is what is drove him to be innovative.
“I have had so much interest in telecommunications. Particularly, I’ve been working so much on audio transmission, and i also happen to have developed a Wireless-Mic and developed a small scale radio station. So now, i wanted to go much further than that. I thought of how I can now come up with a video and audio transmission. More like a television transmission. Much of it is out of interest because I am really interested in telecommunications.”


Daka is definitely one of the few young talented Malawians focused on changing the image of his beloved country. He argues that more and more viewers are asking for more content that reflect their realities – a quality that he says has been lacking in Malawi.
So this is what transmits whatever signal is being produced by the transmitter. And on the other hand, when the signal has been transmitted, I have a receiving antenna, which I also designed. This is called the “z” antenna that us is actually connected to the client’s television for the purposes of capturing the signal which is being transmitted. So basically, like in any other wireless system, it is a wireless video and audio communication which is just referred to as television broadcasting.
Television broadcasting is booming across the continent and young innovators are leading the way. But the industry is not without its challenges.
“We are also working on developing low-cost antennas for the clients or consumers for viewing on their televisions at home — particularly, if they have u-h-f band. We are also working on developing low-cost transmission antennas because transmission antennas are pretty expensive.”
Students at the Malawi university, chancellor college, hope that Daka’s Analog TV project will support teaching and learning by broadcasting course content for e-learning, by recording lectures, conference speakers, fine arts performances and special events on campus.