A campaign dubbed “I Survived Ebola” is generating a lot buzz on social media. last week VOA’s on the line show, featured the creators of the campaign, Sierra Leone’s ambassador to the United States and others on the front lines of the fight against Ebola. 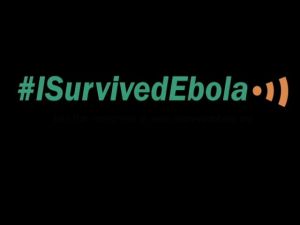 Since December of 2013, when the Ebola outbreak began in West Africa, countries affected by the deadly disease have been working around the clock to combat the epidemic. The world health organization reports more than 20,000 people have been infected with the virus and slightly more than 8,000 people have died from the disease.
A new campaign called I survived Ebola is trending on social media, where Ebola survivors in three west African countries worst hit by the epidemic can share their stories through a mobile application as part of a UNICEF-backed campaign to inform and fight stigma around the disease. Sean Southey is the CEO of PIC-media impact, the creators of the campaign.
“We are focusing on a special dimension on the fight against Ebola, helping survivors tell their stories. We think we’re having a big impact by sharing survivor stories in Sierra Leone, in guinea, in Liberia, on TV, on radio, on print media. We are allowing actual survivors to inspire people to do the right thing, and to challenge stigma.”
Although many people have survived the disease, they still face rejection from their communities due to lack of information and denial, according to the w-h-o and other health organizations. Appearing on the VOA show “on the line”, Bokari Steven, Sierra Leone’s ambassador to the U.S. The said the stigmatization of Ebola has done colossal damage on the streets of the three countries.

“It’s a tremendous amount of impact apart from the stigmatization of it. The world today, we are all joined together by common commerce, transportation, and things like that. And when you have four or five transport companies, air transport companies boycotting a nation, it is almost like snuffling the life out someone. We now have only two airlines flying into Sierra Leone, and our president has appealed again today to the international community that they should not isolate Sierra Leone because that is disaster for us.”
I survived Ebola campaign is funded by the Paul g. Allen foundation. Paul Allen is a U.S philanthropist and co-founder of the tech giant, Microsoft. The foundation has committed $100 million to fight the disease. UNICEF, the U.N. Children’s agency is collaborating on the project.
Southey says that survivors in guinea, Sierra Leone and Liberia will be given smartphones to document their stories and exchange tips on how to cope with the disease.

“So the app is to help the survivors themselves tell their stories and connect with each other. It’s a very simple app we gave with the help of a wonderful little NGO — global giving.org here in New York, each of the survivors a smartphone so they can talk to each other, but they can also share their stories over time.”
Two survivors who have agreed to contribute include, camera “Fanta” Fantaoulen from guinea, who lost six members of her family to Ebola, and Decontee Davis, a 23-year-old Liberian who overcame Ebola, but, sadly, she lost her fiancé. Ambassador Stevens says that his country along with Liberia and guinea has made some strides against Ebola, but the fight continues.
“We have to defeat Ebola as a tripartite way because if there is Ebola in guinea, there will be Ebola in Sierra Leone. If there is Ebola in Liberia, it will come to Sierra Leone. So we all have to coordinate our efforts and make sure that we eradicate Ebola from the basin.”
The Ebola epidemic remains the biggest story on the continent — it’s the largest epidemic in history — and the virus is still spreading.