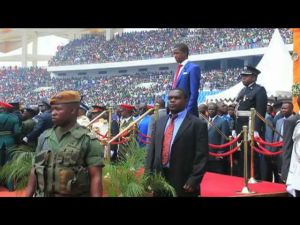 Patriotic front’s Edgar Lungu was sworn in as Zambia’s new president Sunday. He garnered 48 percent of the vote against his closest rival Hakainde Hichilema of the united party for national development, who received nearly 47 percent for the vote.
Speaking after being sworn in at a colorful ceremony at the national heroes’ stadium, Lungu says his government’s policies will remain consistent and predictable.

“Our country will continue to maintain and improve a conducive environment for investors both local and external. Our policies will be underpinned by consistency and predictability. Recently we had restructured the revenue system for the mining industry, from a corporate based tax, to a royalty one which is simple and final tax. The government’s desire to ensure companies pays the right taxes will continue.”


The election was called after former president Michael Sata died suddenly last October. Another election scheduled for late next year when Sata’s term had been due to end. Lungu will have little time to turn around a sputtering economy in one of Africa’s most promising frontier markets. The United Nations has called for post-election unity.
“For those candidates that fought and lost, this is the time to turn to constructive engagement, constructive engagement and support national development in the country and hold the government accountable for delivering.”
Turnout for the election was just 32 percent as heavy rains disrupted voting across much of the country. Observers say the ballot was conducted in a fair manner.
In recent years, Zambia has enjoyed political stability and has annual economic growth rates of 7 percent. The World Bank now classifies it as a lower-middle-income nation rather than low-income, meaning its gross national income per person has risen above about 1,000 U.S dollars.
But Africa’s second-largest copper producer, home to 14.5 million people, is still struggling with poverty, and high unemployment.
“I am very happy that Edgar Lungu is new president of Zambia, I know he will do great things for us.” said one Lusaka resident
James Musonda, another Lusaka resident shares the same sentiment.
“I really accept my president who is in, so i am just congratulating Edgar Lungu for becoming a president.”
The Patriotic Front or PF has led Zambia since winning an election in 2011. That vote ended the 20-year rule of the Movement for Multi-Party Democracy Party. The new government is vowing to support small-scale farmers and create jobs to fight poverty and the enactment of a new constitution as a top priority.