Tourism industry is one of the fastest-growing sectors in Uganda, employing nearly 600-thousand people. Now foreign investors are taking advantage of this growth by investing in high-quality safari lodging facilities such as Kyaninga lodge in Western Uganda.
Uganda is blessed with some of the most spectacular scenic wonders of the world. Its geographical diversity and wide range of vegetation and wildlife make it a unique tourist destination. The tourism industry has been growing steadily over the last couple years and more than a million tourists visit the country each year. The sector is a major creator of jobs and public records indicate the government has earned about 1.4 billion dollars from tourism. 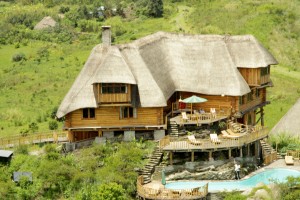 Ugandan tourism is largely private sector driven, and as a result, foreign investors are eager to bankroll tourism projects. Putting their money where their mouth is! Kyaninga lodge, in the fort portal district of western Uganda, opened nearly four years ago and it has quickly becoming a tourist’s stop-over for lodging and sightseeing.
Set against a stunning backdrop of Lake Kyaninga and the legendary mountains of the moon, the lodge has spectacular views and is close queen Elizabeth national park and Kibale national park, Africa’s premier destination to watch chimpanzees. Richard Twesigye is the head barman at Kyaninga lodge.
“Well, this idea came about by because of the owner Steve Williams. He was traveling around Uganda and happened to hear about the chimpanzees in this area, and he came out here. As he was looking around, he fell in love with this place. Then he came up with an idea that he could start up a lodge.
Twesigye says that until recently there was nothing around this area, but since this luxury safari lodge was built, there has been lot of traffic, and land in the neighborhood has raised value. The lodge is also creating employment for the local residents.
“Indeed there is development is going on. If now you want to buy a small plot of land, like an acre, you wouldn’t really get it if you don’t have 5 million shillings and above. So it’s really interesting and surprisingly, most of the workers here are the locals so we are also benefiting from it.

The lodge offers walk – in meals, sports and other recreational activities such as swimming, canoeing, bird-watching and hiking. During my travels in Uganda I ran into tourists from the United States and Australia. Kitty pope is from Atlanta, Georgia.
“I’m having a great time here in Uganda. It’s so beautiful. This is my first time here and I’m just getting started and visiting different places. The scenery is so beautiful and the people are so friendly”
Businessman Ben Anderson echoes the same sentiment.
“I’m living here in Uganda and we do some business – purchasing Cocoa from Uganda and export it to the rest of the world. So we came over here on a business trip and decided to come here to have a nice lunch at Kyaninga lodge.”
Property owner Steve Williams and a team of locals have carefully hand carved thousands of logs to create this exceptional design — the sheer scale of the main lodge is immediately apparent from the moment one crests the hill and the Kyaninga lodge comes into view.
The lodge’s eight cottages are built on platforms and set apart to offer privacy and tranquility. Rosalind McLymont, is not just an American tourist but she’s returned to the area after a nearly 40 absence. She taught at a nearby Nyakasula senior secondary school in the 1970’s. McLymont says she could not be more excited about what the lodge has to offer.
“The architecture is amazing. It’s high up-you get your exercise just climbing the stairs to get to the main building and to get to your room…and so it does a number of things. The air is so fresh and clean. The surroundings are just…listen you hear the birds. You see…you can hear the birds. It’s just a delightful location.”
Visitors on safari in Uganda can also enjoy cultural tours, game drives, boat rides, and hiking, as the country prides itself as having the best lands for exploring the real beauty of Africa. Analysts say Uganda’s robust economic growth has fostered a new middle class, adding to the nation’s appeal.