MOBILE PHONE APPS MADE IN GHANA

By Paul Ndiho
Having access to a doctor in most parts of Africa can be a challenge but here in Accra Ghana – it just got easier, thanks to the mobile app “Dokita.” It provides users with first step health advice and recommendations from doctors within minutes. 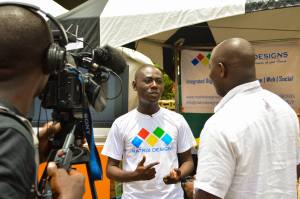 An innovations revolution is unfolding in Africa. Here in the Ghanaian capital Accra two techies have developed a cutting edge mobile APP called “Dokita APP.”
Dokita provides a platform for users who have health related concerned and answers from real doctors. Agana Agana Nsiire is the co-founder of Dokita App
“It works as a regular social network. So, imagine Facebook but it’s not you and your friends, it’s you and doctors. So, basically it’s an online application where users sign up and doctors sign up and then users can ask questions, and then doctors can answer the questions.


Mr. Nsiire says his App helps users to save money on doctor consultation fees and provides instant feedback. Here is how the App works.
“Hello Doctor, I have been experiencing back pains for some time now, especially under my right shoulder. Is there any particular cause? Thank you.”
“Alright, of course a real doctor wouldn’t say this but, “Paracetamol should do the trick,” and send. Alright, so the question has been sent and is displayed now and Steven should receive an SMS.”
I’ve received an SMS from Dokita telling me a doctor has answered my question, “Hi Steven, a doctor has answered your question. To see your answer login at, the link has also been provided for me. So if I were to be using a smartphone, I could just click the link to take me to the login screen where I login to see my answer.
Apps are the rage for a growing number of mobile devices. And young people are taking advantage of this revolution. Daniel Abakah is the founder of Ajumah.com which means “work” is an example. He has developed a mobile APP that helps African freelancers find jobs in other countries over the internet.
“We have tailored this platform just for the African freelancer to be able to go ahead and then do business. So we see it inspiring more African freelancers to even move out and then do most of these jobs. They feel empowered. We target them wherever they are and they still do a good job.
Daniel says that the online platform is generating a lot of traffic and sees potential for growth.
“We have about $ 32,000.00 value of jobs posted on this site.”
Meanwhile, Matrix Designs, Ghana’s leading Integrated Digital Marketing Agency in web design & social media is generating a buzz. The Accra-based tech company also provides a place for young, creative minds TO hone their skills. Bernard Adu-Gyamfi, leads the Social Media team.
“We started off basically as a software company and were developing software but overtime things have changed, so we decided to add web development and social media to it…as part of what we do.
Industry analyst say Matrix design is a highly sought after tech firm. Most their clients love the fact they are a one-stop-shop for all things digitally creative.
“We wanted to create a system where people could put in their information but also take away the area fraud and fake information. So, if you can speak to government systems then it verifies it. Ultimately, it can be translated into a national information or identification system.”
Analysts say this year is already brimming with unique mobile app innovations. Stay tuned to see what developers have to offer next year.

Paul Ndiho is a Ugandan – American video journalist/Executive producer, Africa Innovations & Technology based in Washington D.C with interests in innovation, technology and entrepreneurship in Africa. He is passionate about mentorship and developing the next generation of Africa’s young leaders. Email:pndiho@gmail.com, Facebook: Paul Ndiho and Twitter: @pndiho