BY Paul Ndiho
One month after the peace agreement was signed between the government and the rebels to end the 20-month conflict in South Sudan, UN Secretary-General Ban Ki-moon urged parties to reaffirm their commitment to the deal. Speaking at a high level meeting during this year’s U.N. General Assembly, he called for the implementation of the agreement without delay. 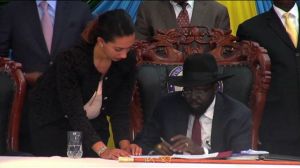 Citing a new window of opportunity for peace in South Sudan, Secretary-General Ban Ki-moon last week called on all parties to demonstrate a genuine commitment to the peace agreement signed last August, by immediately halting military operations and forming the Transitional Government of National Unity.
“South Sudan’s leaders have a chance to correct their grave mistakes and focus on the well-being of those who entrusted them with this role – the people of South Sudan. The road ahead will be difficult. I urge the signatories to honor their solemn commitment and implement the agreement without delay. Reverting to war yet again cannot be an option.”
Speaking at a high-level meeting on South Sudan, held on the sidelines of the United Nations General Assembly, the Secretary-General noted that it is “a pivotal moment” in the history of the world’s youngest nation. He noted that long-term reforms are essential for South Sudan to transcend ethnicity and rebuild a truly national identity, adding that every effort must be made to promote a more equitable distribution of power and wealth.
“Horrific crimes have been committed against civilians in this war. The social fabric of South Sudan has been shattered. To mend it, the provisions in the peace agreement related to justice, accountability and reconciliation must be implemented in full.”


The security situation in South Sudan has deteriorated steadily over the past year and a half since political in-fighting between President Salva Kiir and former Vice-President Riek Machar, and their respective factions, erupted in December 2013.. The hostilities subsequently turned into a full-fledged conflict, resulting in reported atrocities and possible war crimes.
Addressing the meeting via video link, President Salva Kiir stated that he had signed the agreement with some reservations, which he said were not meant to be conditions, but indicators of problem-areas that the parties involved need to address, to facilitate a credible implementation of the peace accord.
He then added, “Nevertheless I proceeded to sign the agreement in order to stop the war and give peace a chance”.
“I reiterate before all of you that I am deeply committed to the full and timely implementation of the agreement and I have the moral and concessional responsibility to restore peace and development for my people who have suffered for more than 50 years of liberation wars.”
The South Sudanese leader said he was “deeply committed to the full and timely implementation of the agreement and he called on all those gathered at the meeting to prevail on the armed groups so that they respect the permanent ceasefire and assist in the successful implementation of the agreement.
“When I decided to join the liberation struggle three decades ago, I did not expect to liberate my people in order to take them back to war amongst themselves,” Therefore, I am determined to stop this senseless war and make sure that, together with my brothers in the armed opposition, we will build a democratic, united and harmonious country by implementing the agreement.”
Dr.Riek Machar the First Vice President Designate, attended in person as diplomats from several countries urged both sides to end a conflict that has killed thousands and displaced millions. Speaking exclusively to VOA, Dr. Machar thanked the secretary general for convening a special meeting on south Sudan, and putting South Sudan on the global stage and urged the international community to support them in implementing the peace deal.
“So we want resources for assembling, containment of forces. We want resources for dissemination of the peace agreement. We want resources for this important process of reconciliation and healing.
Reacting to President’s Salva Kiir’s speech, Riek Machar called on him to remove his reservations.
“He still talks of reservations. He signed the peace agreement with reservations. This gives people doubts of his seriousness to implement the peace agreement.”
Last week President Salva Kiir signed a decree establishing the 28 new states. He said his decision was guided by the Transitional Constitution and to decentralize power. But the opposition leader Riek Machar says President Kiir’s decision to establish 28 new states is a violation of the recently signed peace agreement. He farther called for the immediate withdrawal from South Sudan of all foreign troops.
South Sudan gained independence from Sudan in July 2011 as the outcome of a 2005 Comprehensive Peace Agreement that ended one of Africa’s longest-running civil war becoming the world’s newest country.

Paul Ndiho is a Ugandan – American video journalist/ executive producer, Africa Innovations & Technology based in Washington D.C with interests in innovation, technology and entrepreneurship in Africa. He is passionate about mentor-ship and developing the next generation of Africa’s young leaders. Email:pndiho@gmail.com, Facebook: Paul Ndiho and Twitter: @pndiho