By Paul Ndiho
The label “made in Kenya” is not something you often see on high-tech speed governance recorders. But a young Kenyan technopreneur is trying to change that with his Omata Speed Limiter registered under the trademark of Dalcom Kenya limited. 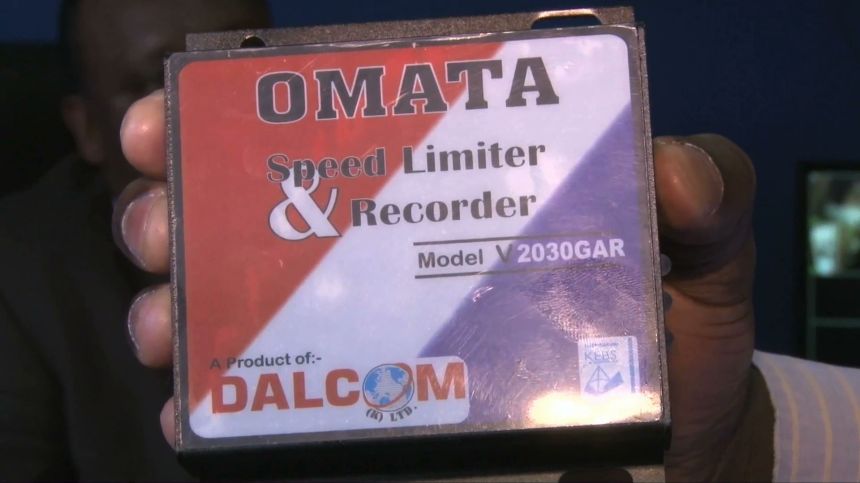 The Omata road speed limiter, or cruise control — commonly known in Kenya as the speed governor, is a state – of – the – art micro-controller technology that assures accurate, smooth operation of the vehicle. The speed limiter computes the speed of the vehicle and continuously monitors the car. Once the vehicle reaches the set maximum speed it stops the car from going beyond the required speed limit.
The Tech Company was started 2006 by David Kiarie, a Nairobi-based “technopreneur”, who wanted to do something good for his community and make money.
“We make the speed governors ourselves, and we are manufacturers of the same brand. We manufacture them here in Kenya.”


Dalcom’s business is booming. It has gone from selling and installing just a few gadgets in vehicles to partnering with government agencies, Matatus the primary means of public transportation in Nairobi and other vehicles.
“So we have come a long way. We started with the fast one, which we call it analog, and now we have the digital one, which records generated the speed, and keeps the record for 72 hours of what the driver has been doing. So even if you disconnect, or remove the data, it will tell you that at least for last 72 hours the driver has been doing this and that.
Dalcom wants to become Kenya’s biggest manufacturer for road safety gadgets. Omata speed device is a digital standalone vehicle speed data logger. David Kiarie says his company wants to create a product by Kenyans — for Africans– thereby creating an avenue for young men and women with the skill in craftsmanship and arts to explore their talents and abilities to fulfill their dreams.
Richard Maina is one of the company’s technicians.
“Most of us are technicians, but we all have the innovative spirit in us. So basically most of us are self-taught, we didn’t go university to study, most of us learned on the job. And that’s how we go to be as good as we are.”
Omata speed governor is among those technologies approved by the Kenya Bureau of Standards for use in vehicles and Installation of the speed control gadgets is among measures spearheaded by the Ministry of Transport to help curb road accidents. The regulations require that public service vehicles and commercial trucks with weight of over 3,048 kilograms be fitted tamper-proof speed recording devices. Maina explains how it works.
Just like in a regular vehicle when a vehicle is in neutral, even if you press the gas pedal, the car will not move. But you can see the revs are moving. So after you engage the first gear, that’s when you can start moving. Then gear two, even the speed increases, gear three the speed goes a bit faster, now in gear four, that’s where you get 80km per hour now that where the car needs to be limited. It gives you a warning buzzer so that you can know that you are going beyond the speed limit.
The tech company continues to do very well in a market that is highly competitive because their technology is saving lives.
“We took it upon ourselves to work together with the government, and I think even the records speak for themselves. Since the speed limiters were introduced, our roads have been safer.”
Analysts seem to agree — they say since Kenya government started enforcing the use of digital speed limiters, like Omata the number of accidents on the roads has reduced drastically. And for “technopreneurs”, like David, whose Omata brand is becoming a household name- hopes to stay competitive. But, whether it can sustain the growth, keep the price point low and continue to employ workers at higher wages than its counterparts will, ultimately, be the true test.