PARTNERING TOGETHER TO TREAT PEDIATRIC CANCER IN UGANDA

This is a fascinating story of a remarkable young man James Mooney who is already taking a leadership role in helping some of the worlds’ most vulnerable people young children diagnosed with Cancer and two hospitals partnering together for a social cause to address pediatric cancer in Mbarara Western Uganda. 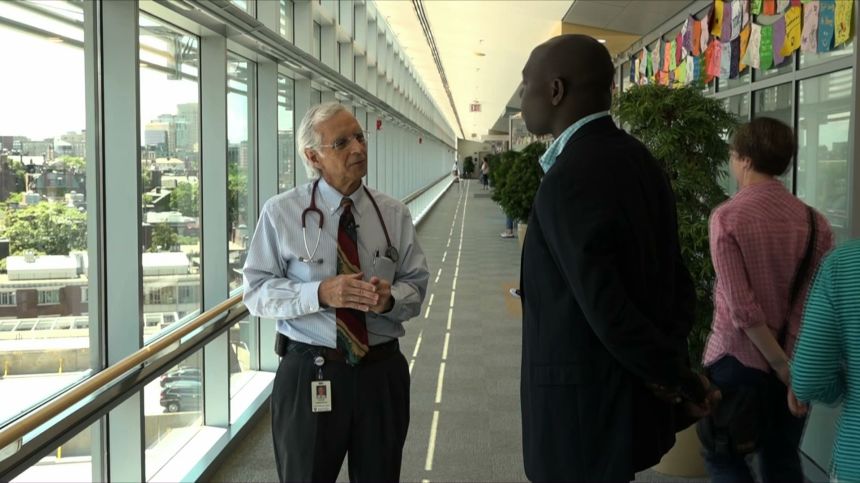 The World Health Organization reports over 200,000 children worldwide receive a cancer diagnosis each year.  Four-fifths of these children could survive, if they received appropriate medical care.  Ninety per cent of deaths in children with cancer are in low-income countries where medical care is not available or adequate to treat their cancers.

Well, I have come here in Boston find out more about pediatric cancer and what this partnership between Massachusetts General Hospital and Mbarara Regional Referral Hospital, the teaching hospital of Mbarara University of Science and Technology, in South Western Uganda is about.

It all started nearly three years ago when a young James Mooney was on a summer vacation with his parents visiting Mbarara University of Science and Technology, Mbarara Hospital, and a village home of a sick child. This eye-opening journey inspired James Mooney to return with a plan to raise awareness for children with cancer by recruiting students to run in a race, “Uganda Color Run for Pediatric Cancer,” and raise money through a GO FUND ME website for this cause.

“I do fundraising and work on projects in Uganda to raise awareness for pediatric cancer and build more facilities at Mbarara University of Science and technology to help them build better facilities and better equipment to combat pediatric cancer.”`

James Mooney comes from a generous family – their Mooney-Reed Charitable Foundation, has given away more than $13 million in charitable contributions in recent years. The Mooney family is based in Boston, Massachusetts.

They have many charitable interests. Through his parent’s interest in supporting Mbarara Hospital, James is developing his own interests in Uganda. He and his family are raising money to build a malnutrition clinic for children and an emergency medical fund for Mbarara hospital.

“Three years ago was my first trip to Uganda, I went with my family, and we went with Doctor David Bangsburge. He used to work at Mass General Hospital, and he used to be the heard of the Global Health Initiative. So he brought us to Uganda to show us around and show us the facilities, the country, and what his project was all about. And at the end of the trip, I decided that maybe this is something I want to get involved. So I decided, I went to David, and I was like “hey I want to do a project I want to help out. What does the hospital need?”  And he was like, “well they are trying to build a new pediatric cancer ward. And they need help with that. In general, in that region of Africa, they need help raising awareness for pediatric cancer.”

James Mooney and his family in collaboration with Mass General Hospital have since built strong ties with Mbarara University and Mbarara Hospital and promised to be a lifeline for those children diagnosed with Cancer. So far this young budding philanthropist has raised tens of thousands of dollars to support Mbarara Hospital, and some of the money has gone directly to the construction of this pediatric cancer ward.

“My big goal was to raise the money so that I can build the facilities so that they could treat pediatric cancer but also raise awareness, and that’s where the idea of the color run came in.

Mooney says early detection for pediatric Cancer is critical and a lot of people especially young children don’t know how, or they don’t have the means to detect it early.

Massachusetts General Hospital, Mbarara University of Science and Technology, and Mbarara Hospital have had a Partnership that spans a couple of years. Dr. Howard Weinstein, Chief of Pediatric Hematology-Oncology at Mass General Hospital for Children has made several trips to Uganda.  He says that Mass General clinicians and researchers are helping to improve health care and conduct pioneering research in Uganda.

“My goal is to be able to take what we’ve learned here, use it to all parts of the world, and we’ve been very excited to work with our colleagues and Mbarara Uganda. To help develop a Childhood Cancer program so that children in Uganda can have the same opportunity for a long and healthy life as do the children that we’ve seen in Boston Massachusetts.”

There are over a dozen types of childhood cancers and several sub-types. Dr. Weinstein says Pediatric cancer remains a leading cause of death in children in developing countries but is treatable.

“Our goal is to develop a program that involves on training doctors nurses pharmacist and pathologist how to diagnose and treat children with cancer I’m willing to help the team in Mbarara become very of the necessary careless involved in taking charge of a patient who has cancer.”

Cancer in differs considerably from cancer in people of all other ages and the cause of cancer in children is not known.

Mass General’s Web site says the Collaborations between Mbarara University Hospital and Mass General physicians and scientists began over a decade ago. Initially focused on the care and treatment of persons living with HIV, the collaboration has grown to include cutting-edge biomedical research, technology innovation, and economic barriers to improved health.

Cara Olivier is a nurse practitioner at the cancer center and with its global health program. She has been traveling back-and-forth to Mbarara Uganda for the last two years to work on the adult and pediatric oncology initiative. She says the partnership between the two hospitals could not have come at better time.

“What I found was a group of physicians and nurses and pharmacists who are all working incredibly hard, and all wanted to deepen their understanding of oncology care and the best way to help patients who are diagnosed with cancer and true to their illness.

“The challenges I hear most commonly, are that they know exactly what to do to help the patient get through this diagnosis. And they’re just trying to find the resources to make it happen it is an incredibly intelligent group, and bright group of physicians, and nurses who know what they need to make it better and who are just looking for ways to access that.”

The partnership has helped Mbarara Hospital start centers of excellence. For example, treating adult cancer and children’s cancer. Speaking about the collaboration between the two hospitals, D r. Celestine Barigye, Director of the Mbarara Regional Referral Hospital, said with the help of Mass General Hospital – they’ve built a new ward for pediatric cancer and cancer patients, especially children, have been moved away from those with general illness.

“I appreciate Mass General Hospital from the United States. Who has given us the money that we used to construct and initiate this project and therefore as we progress, we’re going to handle diseases of the adults, cancers of children but also we’re working very closely with Uganda can institute which will be giving us medicines. ”

Meanwhile, Last year Uganda’s only radiotherapy machine used for treating cancer broke down beyond repair, and that left thousands unable to get potentially life-saving treatment. Sources say that the government has purchased a new machine. The project will support the Uganda Cancer Institute to deliver high-level Education, clinical training, and research and provide care for cancer management for Ugandans as well as the population of the region.