Nearly 4 million people live in Nairobi, the capital of Kenya.

Perhaps no big city has such an abundance of nature — right at its back door.

“This is like what Central Park is to New York.”

Trish Hayes has been a Nairobi National Park fan for many years.

On the border of one of Africa’s fastest-growing cities, it is home to endangered rhinos, lions, buffalo, giraffes – more than 400 species.

The British first protected the land in the 1940s. And it has remained unspoiled … 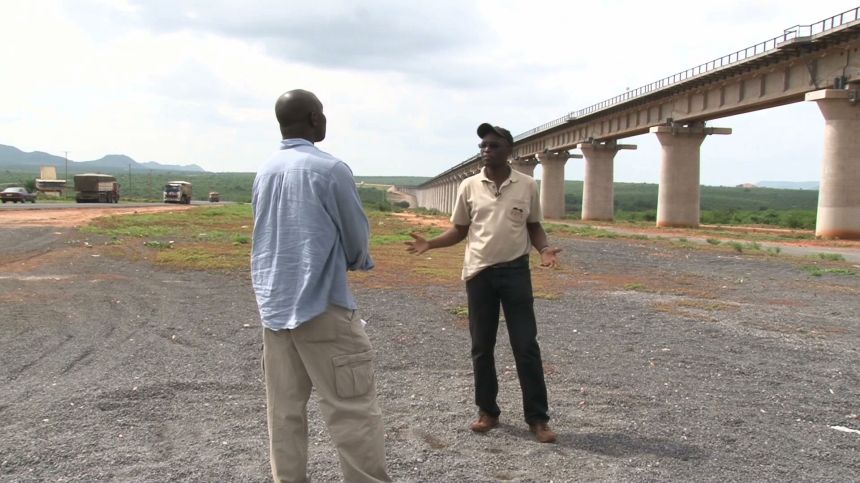 Kenya’s government is extending the country’s new Chinese-built railway straight through the heart of the park …… splitting the cherished preserve in two … … and igniting a firestorm. Opponents say they were blindsided.

Until his death earlier this year, Sidney Kuntai led the coalition fighting the route. He said construction started before most Kenyans understood.

“In the last one year and a half … This matter was kept in the dark.”

Chinese contractors erected massive concrete pillars – an elevated track visible from one end of the preserve to the other.

The railway, known as the S-G-R, is a vital link in China’s trillion-dollar “Belt and Road” initiative – a massive effort to build railways, roads and ports linking Africa, Asia and Europe.

China promises to lift emerging economies like Kenya’s with new trade and manufacturing.

But there’s also an environmental price to pay.

According to the World Wildlife Federation, that hundreds of threatened and endangered species stand in the way of China’s construction plans …

Critics say that in the rush for jobs, Kenya’s government failed to properly study the environmental impact.

But ultimately, the challengers lost in court.

“All these things are not in place, and the Chinese are busy blasting.”

The Kenya Railways Corporation and Chinese builders declined to answer VOA’s questions or agree to interviews about Nairobi National Park.

But the Kenya Wildlife Agency did allow VOA to visit the Tsavo National Park in central Kenya to see the SGR’s impact there.

The railway’s first leg, from Nairobi to Mombasa, opened a year ago. It cuts through the five-thousand-square mile preserve.

Dr. Ben Okita is with Save the Elephants. He is helping Kenya Wildlife to study the environmental effects.

“One major impact the SGR has had on the ecosystem is to do with interfering with the contiguous movement and the ecosystem. So, it’s contributing to further the splitting of Tsavo East and Tsavo West national park.”

The Chinese built eight high overpasses to allow wildlife to move freely under the train.

To see if they’re working, Okita uses GPS collars to tag elephants and track their movements.

His maps show signs that the animals are confused.

“There is crossing, but then you can see there are some sections, where the animal seems to be struggling. They stay right there doing a lot of pacing here.”

Making matters worse, humans are drawn to the overpasses because they create park access for livestock and scavenging.

“Because of these human settlements, when animals want to come through, they reach a point where they’re scared. … So then that underpass eventually is rendered useless for wildlife.”

The Chinese built concrete and wire fence guards the track from animals. But they are failing.

“This outer fence line is barely one year old. And you can see already seriously damaged by wildlife. And because of that, the risks of wildlife crossing over and causing accidents are very high.”

Now, all the original fencing is being replaced.

Alex Mwazo of Kenya Wildlife Service is on the research team at Tsavo.

He said most animals – Zebras, Buffaloes, Antelopes, even Lions – are slowly adjusting.

One exception: The giraffes.

“Giraffes tend to be shy animals, so it will take time before they actualize and gain the confidence and start utilizing the underpasses.”

Lala Frederick is the leader of Mwazo’s research team.

Although buffalo and other animals have been hit by the train, Mwazo said SGR is less of a risk than trucks on the nearby highway.

“Their main problem is not even the railway, I think the road adjacent to the railway, is just a like a brick wall.”

While scientists studied the impact on Tsavo, Kenyans looked on with alarm as the train cut Nairobi National Park in two.

Their protests in March came too late.

By that time, Chinese builders had bulldozed into the preserve, quickly erecting an imposing row of concrete pillars to support the track.

Eventually the route will extend to the Ugandan border.

Long-time neighbors say the government turned its back on the park’s heritage.

Kitengela Glass sits at the end of a long dirt road in Oosilikron, south of the park.

“They had so many different maps, and I’m sure it was to confuse people, because nobody knew when we …

Croze said something precious is being forever lost.

“We have so few animals. African animals. Where do you find them? In Kenya! Maybe a few in Tanzania. Maybe a few, not even Uganda any more.

And how can you — this is such a treasure! This is a treasure of the world.

And here you come, and you sell it to the Chinese? For a railway? Bloody Hell!”